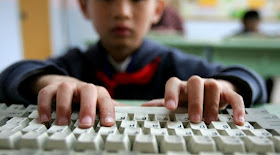 In case you missed it, a wrong-minded study was released this month from the National Bureau of Economic Research that says that computer ownership does not affect educational outcomes.

Makes you wonder how on earth earth such misguided studies can even be commissioned. Also makes you curious about who is really behind the funding of research that misleads readers into believing that poor kids don’t need the same tools their wealthier peers use for success.

Here is an excerpt from the study:

Computers are an important part of modern education, yet many schoolchildren lack access to a computer at home. We test whether this impedes educational achievement by conducting the largest-ever field experiment that randomly provides free home computers to students. Although computer ownership and use increased substantially, we find no effects on any educational outcomes, including grades, test scores, credits earned, attendance and disciplinary actions. Our estimates are precise enough to rule out even modestly-sized positive or negative impacts. The estimated null effect is consistent with survey evidence showing no change in homework time or other "intermediate" inputs in education.

Note: You may purchase this paper on-line in .pdf format from SSRN.com ($5) for electronic delivery. However if you have a .GOV email (i.e. @schools.nyc.gov) you may be eligible for a free copy.

We already know that a dump and dash of computers, books, or really anything is not going to magically have results if there is no time spent on effective use combined with coaching, modeling, and support.

Athletes become great because of coaching, opportunities to play and practice under the guidance of experts, support from parents, perhaps a love and appreciation of the sport by family, friends, or community, and more.

We saw the same thing a few years back in the New York Times story: Seeing No Progress, Some Schools Drop Laptops. Again, neither teachers nor students had guidance in using technology effectively for learning.

Unfortunately, like books, laptops are not a magic pill for student achievement sans support.

Folks may remember an anecdote from the book Freakonmics when the Governor of Illinois announced a plan to mail one book a month to every child from the time they were born until they entered kindergarten. The plan would cost $26 million a year. But, Governor Blagojevich argued, this was a vital intervention in a state where 40 percent of third graders read below their grade level. The idea was that children born in Illinois would end up with a sixty-volume library by the time they

entered school and then would perform better on their reading tests.

The Governor explained that students who score higher on tests have books in the house. The problem is that it isn’t the miraculous appearance of books that lead to these scores, but rather so many other factors such as parents who speak the language and read books to their children. Parents who model and value reading. The fact is that books in the home were not the cause of

intelligence but rather an indicator.

The danger in such studies is that in the wrong hands they can be used to make a case for not providing all students with the tools that can lead to success with the right support.

The next time you see a study that reminds us that dumping materials off to kids doesn’t result in some kind of magical osmosis on a child’s brain, it should be no surprise. There is no magic tool when it comes to student success. The magic comes from the tool combined with support, collaboration, coaching, modeling, and more.

You know. The kind of stuff that teachers do.
Lisa Nielsen
Share