The New York City Department of Education lifted the ban on cell phones last spring. For some schools the difference was that students could bring their phones to school, but have them locked up or out of sight. For some of the more innovative schools however, that meant teachers could empower students to harness the power of student devices for learning.

That's exactly what happened at Harlem's P.S. 129 where 4th grade students in Stacey Nealy’s and Ryann Geldner’s launched the initiative in their school using the devices to better understand Native Americans. Students read information and sent in their reflections via a student response system from their own phones or laptops. For students without devices they were provided a school-issued device or they shared with a peer. 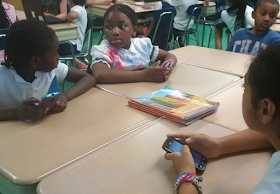 In an interview with the Hechinger Report, Amy Thiam, a fourth-grader explained, “We are learning and having fun at the same time.”  You can read the whole article here.