Jeff Bliss got our attention when he shared his frustration with his teacher, classmates, and the world about his learning environment.


The now viral video captures a room of passionless students, some with their heads down, some with a facepalm, some staring into space, all silently sitting at their empty desks seemingly disconnected not only from each other, but also from their behind-a-desk-fortress teacher. 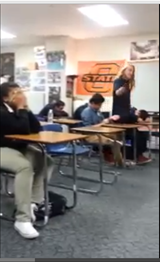 That is until Jeff Bliss got up and spoke:

Jeff Bliss: [I’m tired of] hearing this freakin’ lady go off on kids because they don’t get this crap. If you can just get up and teach them instead of handing them a freakin’ packet, yo. There are kids in here who don’t learn like that, they need to learn face-to-face. You’re just getting mad because I’m pointing out the obvious.


According to classmate Colleen Hunt, “Everyone at our school is proud of him for speaking his mind and not being rude about it.” Jeff reignited a national conversation about the state of the educational system, the seemingly indifferent attitude of teachers and an administration that could allow teaching (or lack thereof) like this to go on in the classroom right under their noses. But many of those who work in or with, attend, and/or have children in schools, understand that in many cases it is not the teacher or administrator, but forces outside the school that has led to the development of the packet-driven classroom.

I experienced this first hand. Two years ago I was overseeing a project where my staff was working with schools to support teachers in partnering with students to create passion-driven learning environments. I had a great visit, during what we called an innovation field trip, to one of these schools. What a day it was as students excitedly presented their worthy-of-the-world projects. They clearly owned their learning and demonstrated this in a variety of ways. Some had created videos, some PowerPoint presentations, some wrote articles, and more.  Students learned with and from one another, and they found places to share their work beyond the classroom.

As I was leaving the school I happened to run into their teacher and commended her for doing such wonderful work. I was struck by the fact that she didn’t smile when I did. Instead, she thanked me but told me this would likely be her last year in the classroom.  What? Why? I didn’t understand.  She explained that once they got back from their February break (the following week), the school goes into full test prep mode and she would be required to stand by complicit as she watches the shining light fade from the eyes of her students.

I looked around to make sure no one else was listening and whispered, “Why don’t you just keep teaching the way you teach and close your door?” She explained that this was not possible.  There was actually drive-by test prep collection. If she was unable to provide evidence that the required testing and prepping were going on at all times she was at risk of being written up for insubordination.

Furthermore, online testing and prepping was on its way which meant administrators no longer had to go around to classrooms to ensure no student was left untested. They could log on and get data reports right from their desktop computers.

For those who aren’t teaching or don’t remember what it’s like to take a standardized test, here is a reminder:


Students sit under fluorescent lights in rows too far to see what the other is working on. The walls and bulletin boards are stripped of instructional charts, celebrations of work, or instructional aides that usually fill the room.  The teacher may say nothing other than what is outlined in the packet. A student may not discuss a question with a classmate or teacher. Each question is what it is. There is no clarification. There is only one right answer. There is no nuance. Teaching is cheating. Talking is cheating. Looking at a bulletin board, using a book, a phone, a computer…cheating, cheating, cheating, cheating.

With this in mind, fast-forward to Jeff’s test-prep classroom, under his teacher, Ms. Phung. There it is, the perfect packet-driven classroom. Rows of desks. Walls devoid of student work or learning materials. Students sit at desks clear of all but a #2 pencil so there is ample room for packets and scratch paper.The teacher distributes packets, reads instructions, but does not teach. If students ask a question, stick to the script. The lines sound something like...”Reread the question. Do your best.“ Gosh, thanks! 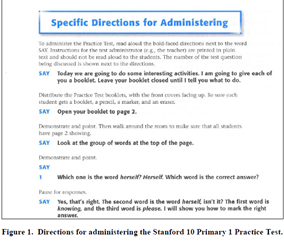 Here’s something many of us know, but rarely say out loud: when it comes to packet teaching you don’t really need a teacher. Not only is a teacher not necessary for a “Pedagogy of The Test,” their teaching services are prohibited. Even after the students have drilled, killed and bubblefilled, their own teachers aren’t even allowed to grade their tests as this too can result in cheating… and the reality is, test scoring doesn’t need humans anyhow. Even in the 80s when I was in school we had bubble scoring machines and we are moving toward automated writing, speaking, and scoring systems as well.
When we put this Bippity Boppity Boo all together, what we’ve got is a Jeff Bliss teacher whose job is to create a sterile environment, distribute packets, read instructions, keep kids quiet, and collect their papers at the proper time.
We then realize that Ms. Phung was a model packet-driven classroom teacher. This is part of the reason why there was such outcry by educators when Jeff Bliss expressed frustration towards the teacher. If she is like most teachers, she likely thought she had signed up for a very different job, but the job changed, and eventually, so did she.
The problem, of course, is that this is not what students want, this is not what parents want for their children, and this is not the work that teachers want to do. Jeff Bliss summarized what our students want and need.

You want a kid to change and start doing better? You gotta’ touch his freakin’ heart!“


And that is why teachers should be celebrating Jeff Bliss for saying what so many can not. We know and want this type of teacher and the class she presides over to become extinct.  We can automate packet distribution and scoring, but computers will never replace what students find most important.

Relationships.
Students want a teacher who knows how to build relationships with them. Connect with their heart. Know the passions, talents, and interests behind each face. Give them their learning to own for themselves. Build trust by listening when students talk, even when it is about the problem they have with the way they are being taught.

Unfortunately, when our eye is so tied to the prize, and that prize measures how well students sit disconnected from the world, unable to speak to each other or even the teacher and fill in bubbles, we will get teachers like Ms. Phung and classrooms that house Jeff Bliss.
Lisa Nielsen
Share